The following important information is missing from this article or section:
Almost everything is missing here - except existence and foundation
Help Wikipedia by researching and pasting it . 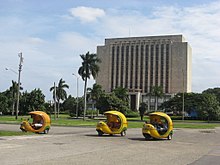 The Biblioteca Nacional de Cuba José Martí (BNJM; German Cuban National Library José Martí ) is the national library of Cuba . It is located in Havana ( La Habana ) at the Plaza de la Revolución and is named after the national hero José Martí . The library was founded in 1901.

Leonard Wood , military governor of Cuba, issued Military Order No. 234, published in the Gaceta de La Habana , in 1901 to establish a national library. Domingo Figarola Caneda became the first director on October 18, 1901. There was no other founding document or library development plan.

It was only after the Cuban Revolution in 1959 that the library took on important library tasks as a depository library, coordinator for a library network with the provinces, the publication of the national bibliography Bibliografia Cubana , creation of an OPAC and the digitization of the national literary cultural heritage.