Bliss symbols are one of Charles K. Bliss developed in its basic features in the 1940s Pasigraphy , a collection of pictographic and ideographic characters . Each character represents a term , and multiple symbols can be combined to form sentences or express ideas. 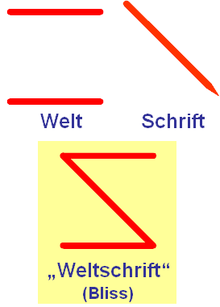 Examples of the Bliss symbols

Charles Bliss was inspired by Chinese characters , which allow speakers of different languages ​​to communicate with one another. Over a period of 40 years he designed his consistently logically structured communication system of a special font to support mutual international understanding and understanding. This graphic medium should contribute to better cooperation and understanding on an international level between people of different linguistic origins. However, this intention to make a contribution to understanding between cultures has not been fulfilled.

The Bliss symbol system, however, gained its meaning in a completely different field of communication and thus became known worldwide. It is one of the first systems that was used as an aid in the context of the special educational method, supported communication, for people who, as a result of motor or cognitive speech disorders, cannot or only to a very limited extent communicate with others via spoken language.

Since it was first used in 1971 at the Ontario Crippled Children's Center ( Toronto , Canada ), Bliss symbols have appeared as a means of graphically representing communication content on various types of communication boards . Computer programs and programs for speech output devices are also based on the Bliss symbol system.

The symbols are defined in the BCI standard (BCI = Blissymbolic Communication International) and are made up of almost 120 basic symbols ("key symbols"). A total of almost 4500 symbols are used. Bliss is used for communication with the help of symbol boards. The user communicates by pointing to Bliss symbols in sequence (for example, by electronic selection). The communication partner reads the meanings of the symbols above in alphabetical letters. A pilot project on using Bliss on the Internet was just recently launched in Canada. Bliss texts can now be sent as electronic mail.

An example is to illustrate how the Bliss symbols work.

I : characters for person and 1 (for the first person singular, since no plural sign is given)
want : heart and fire + signs for action words
walk : two legs + sign for action words
Cinema : House + Film (film roll in a container)

Other symbols are derived from the symbol for wheel , such as:

With a short line below it

means transport.
With a long line below it means journey

.
A chair over the wheel turns the wheel into a wheelchair

.
If you give the wheel wings, you have an airplane