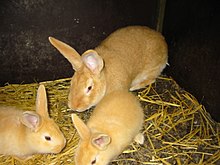 Appearance of the burgundy rabbit

The Burgundy rabbit has a barrel-shaped, relatively high body. Its overcolour is yellow-red, the underside of the belly, the underside of the flower and the wild color markings are white to cream-colored at most. It is a yellow deer colored rabbit with the effect of the yellow enhancer. The corresponding hereditary formulas are:
AbCDGy2 (German symbols) or ABCDe (English symbols)

The color of the Burgundy is significantly lighter than that of the Sachsengold and the Red New Zealander .

History of the Burgundy Rabbit

The origins of the Burgundy rabbit are not clear from the literature. French and Swiss breeders were apparently involved in its development, with reciprocal crosses with the Red New Zealander in the past. The Dutch standard specifies France as the breed's country of origin.

The breed was characterized before the First World War by Albert Renard, who also contributed to the stabilization of reproduction. The history of the breed and its crossbreeds was published in a French animal magazine, L'Acclimatation, in 1919, and the place of origin is named Dijon and the Côte d'Or. Since 1928 the breed has been represented by the French association AELFB (Association des éleveurs de lapins Fauve de Bourgogne - Association of breeders of pale yellow Burgundy).

The breed was recognized relatively late in Germany. In the GDR , the Burgundy rabbit was first approved as a breed in 1980 with the assessment provisions for pedigree rabbits in socialist countries. The recognition in the Federal Republic took place in 1986.

The Red New Zealander is distinctly red in color and has a much more blocky build.