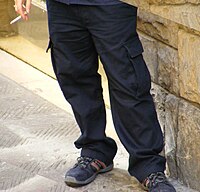 A cargo pants (ger .: cargo , German: cargo ) is a pants (usually made of cotton ) with attached or sewn pockets in the thigh or knee area. The cargo pants were developed for military use during the Second World War and can be found today. a. also used by workers, the police or emergency services. In addition, it is also worn as casual clothing and for doing sports (e.g. trekking ). Depending on the fashion , the focus is not only on the functional character. Cargo pants were also available as designer goods for 2500 euros. From around 1990/95 to around 2010/15, cargo pants were widely accepted as everyday clothing, but then suddenly lost their reputation. It is not yet clear whether attempts in the media and the fashion industry to free them from the stigma of lower-class workwear in 2019 will be successful.