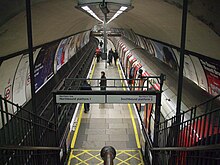 Clapham North is a London Underground station in the London Borough of Lambeth . It is in Zone 2 at the intersection of Clapham Road, Clapham High Street and Bedford Road. Trains of the Northern Line stop here . In 2013, 6.17 million passengers used the station. About a hundred meters away is Clapham High Street Station on the South London Line , part of the London Overground network .

The station was opened on June 3, 1900 by the City and South London Railway under the name Clapham Road , as part of the extension to Clapham Common . In the course of far-reaching renovations along the entire line, the station was closed from November 28, 1923 to December 1, 1924. At that time, the original station building was also replaced by a new building designed by the architect Charles Holden . The station was given its current name on September 13, 1926.

Besides Clapham Common, Clapham North is the only remaining tube-type station that has a central platform ; a construction method that was still widespread along the Northern Line at the beginning of the 20th century. Clapham North is also one of eight London Underground stations that were converted into an air raid shelter during World War II .