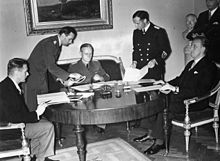 The German-Estonian non-aggression pact was an international agreement between the German Reich under Adolf Hitler and Estonia . The signing took place in Berlin on June 7, 1939. The signatories were Joachim von Ribbentrop on the German side and Karl Selter on the Estonian side . On July 24, 1939, the treaty was ratified in Berlin. In the League of Nations Treaty Series , the treaty was deposited on August 12, 1939. The non-aggression pact was limited to ten years. From the German point of view, the treaty was intended to prevent the Soviet Union and the Western powers France and Great Britain from having a growing influence on the Baltic States . Germany wanted to prevent encirclement.

The German Reich offered Lithuania , Finland , Denmark , Norway and Sweden the signing of non-aggression pacts on April 28, 1939. Finland, Norway and Sweden rejected the offer. A corresponding agreement with Lithuania was passed in March 1939 after the Memelland was surrendered to the Reich without a fight.