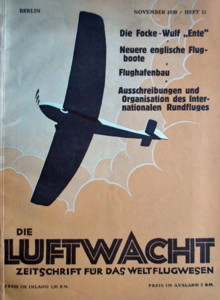 The Air Guard. Zeitschrift für das Weltflugwesen was an aviation magazine that appeared in Germany from the early 20th century until September 1944 . The magazine was published in Berlin .

During the Nazi era , at the request of the Reich Aviation Ministry , the name of the magazine was changed to Deutsche Luftwacht from the first issue in 1934 and a completely new structure was created by splitting it into the three separate issues Luftwissen , Luftwelt and Luftwehr . The main editor was Otto Hollbach in cooperation with the German Academy of Aviation Research and the Lilienthal Society for Aviation Research . Reichsmarschall Hermann Göring and other high-ranking Nazi military leaders were often pictured in the magazine. During this time, the title page also bore the Nazi swastika emblem. During the period of World War II, military activities, such as the bombing of Coventry , were featured in articles.