A Dobsonian spectrophotometer is a differential optical absorption spectrometer used to determine the thickness of the ozone layer . The device was developed by Gordon Dobson between 1923 and 1931 . The Dobsonian unit for the measurement result was named after him. Up to the end of the 20th century, 135 devices had been produced, of which around 80 are still in operational use today. 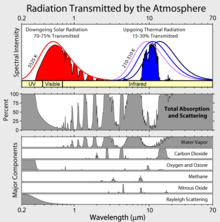 Ozone causes a steep drop in atmospheric transmission at 300 nm wavelength. The Rayleigh scattering is flatter.

The Dobsonian spectrophotometer works in the transition range between UV-A and -B . The light source is the sun. A prism in the device splits the light spectrally. In the case of two to six wavelengths, intensity ratios are determined in pairs, in that the greater intensity is weakened to the lower by a gray wedge. At a wavelength in UV-B, e.g. B. 305.5 nm, absorbs ozone strongly ( Hartley band ), in another in the UV-A, z. B. 325.4 nm, the UV radiation penetrates almost unhindered through the ozone layer.

According to the Lambert-Beer law of absorption , the transmission ratio read from the shift in the gray wedge depends on the difference between the absorption coefficients at the two wavelengths measured in the laboratory and on the concentration integrated over the irradiated path . For the desired layer thickness, divide the zenith distance of the sun by the cosine . In addition, the less wavelength-dependent Rayleigh scattering on air molecules must be taken into account. The varying aerosol content of the atmosphere (dust, droplets) hardly disturbs, since the Mie scattering is only weakly dependent on the wavelength. So it is possible to measure even when the sky is completely overcast.