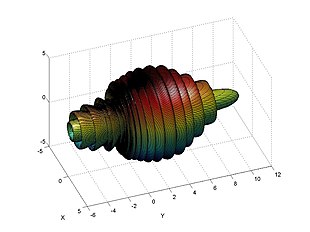 When Mie scattering or Lorenz-Mie scattering (after the physicists Gustav Mie and Ludvig Lorenz ) is defined as the elastic scattering of electromagnetic waves of spherical objects whose diameter is approximately the wavelength corresponding to the radiation. This scatter can be described physically with the Lorenz-Mie theory .

Court formation during the full moon , also known as corona , caused by the classical geometric scattering of small drops.

The Tyndall effect created by Mie scattering makes the area around the tower appear brighter. The apparent "shadow" arises from a lack of the effect within the shadow volume of the tower.

The Mie scattering creates the Tyndall effect . This arises from scattering on objects in which the particle diameter corresponds approximately to the wavelength.

The scattering on the molecules of the air is called Rayleigh scattering, the falling raindrops and floating fog dripping as classic scattering and only the emulsified fat droplets as Mie scattering, although all cases are exactly described by the Lorenz-Mie theory become. In practice, these cases can be easily separated from one another by the different degrees of polarization and the scatter distribution:

Mie scattering is also important in radio technology . In this way, the reflection and the radar cross-section of metallic bodies can be calculated whose circumference is in the order of magnitude of the wavelength of the radio waves. The effective reflective surface of a metal sphere with a diameter of a third of the wavelength is almost four times what would be expected according to classical scattering. Further, smaller maxima occur with integer multiples of the circumference to the wavelength.