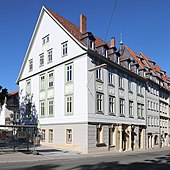 The Dornheim Palace is located at Steingasse 24 in the Upper Franconian city ​​of Coburg . In the 16th century, the core of the three-story, listed eaves side house was built.

In the 16th century, the corner house on the lower complex was built with two floors across from Ehrenburg Palace . In the 17th century, a renovation followed with the addition of one floor and a redesign of the facade. The roof structure was built in 1681/1682. The building was converted in 1801 to accommodate guests of the ducal family and was in ducal ownership until 1901. In 1900 the corner house was given a neo-baroque plastered facade. From around 1900 the two-storey rear building housed the printer Robert Dornheim's printing press, owner of the Coburger Zeitung publishing house . It was enlarged in 1904 and 1909. In 1977 the lower level of the roof was completely expanded and the second level was expanded in areas.

From 2002 the building was owned by the city and was not used. It was originally intended as an extension of the office building. In 2016 it was sold and subsequently renovated. In 2018, the owners received the Medal of the Free State of Bavaria for the exemplary renovation of the monument.

The eaves side house has windows and doors with drilled frames and diamented wedge stones on the banded ground floor . Approximately in the middle of the building there is an arched portal with two free-standing round columns as the entrance to the building. The street facade has six window axes with a right double axis on the upper floors. The parapets of the windows on the second floor have stuccoed emblems with Masonic symbols. The three-axis gable side is designed analogously to the street facade. When the attic was expanded for residential purposes, the gable roof got two rows of dormers. The two-storey rear building to the lower complex has the shape of a garden pavilion and is designed with Art Nouveau elements.

The gable roof has two collar beam layers and a span of about 14.4 meters, a height of about 8.6 meters and a length of about 14.3 meters. It comprises 16 racks.