European Directorate for the Quality of Medicines 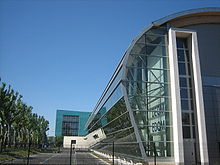 The first director was Agnès Artiges until the end of July 2007 . After her retirement, Susanne Keitel took over the management in October 2007.

The EDQM issues certificates of conformity for drugs and pharmaceutical excipients , which reduce and standardize the scope of documentation in subsequent drug approval procedures .

Commons : European Directorate for the Quality of Medicines & HealthCare  - Collection of images, videos and audio files