Law concerning the chambers of commerce (Grand Duchy of Hesse) 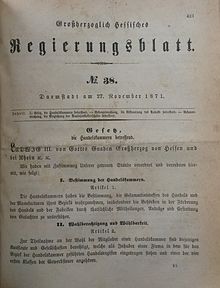 Publication of the law in the Grand Ducal Hessian Government Gazette

These chambers were each brought into being by individual grand-ducal ordinances. There was no regulation for the whole of the Grand Duchy. In March 1869, the two liberal MPs Georg Oechsner and Alexis Dumont submitted a motion to the second chamber of the estates of the Grand Duchy of Hesse that the government of the Grand Duchy of Hesse should enact a Chamber of Commerce law for the whole of the Grand Duchy. The core of the law should be a right to vote for the members of the Chamber, after all merchants and traders in the first four classes of the trade tax law of December 4, 1860 should be given the right to vote. The second chamber approved the bill with a majority, but advised waiting for the Prussian Chamber of Commerce Act of 1870 to be passed.

The government took up the bill and, after the Prussian law was passed, coordinated with the presidents of the chambers in Mainz, Offenbach and Worms. Then on September 22, 1871, she submitted a bill to parliament that largely followed the Prussian model. The right to vote followed the liberal proposals. Only details of the electoral procedure (§§ 9 ff.) Were critically discussed: In the case of newly established chambers ( none existed in the province of Upper Hesse ), a government official should lead the constituent election according to the government draft. Conservative MPs demanded that all elections be conducted by government officials, Liberal MPs that all elections should be organized autonomously by the chambers. Ultimately, the government draft found a majority.

On September 22, 1871, the second chamber approved the law. After the approval of the first chamber, Grand Duke Ludwig III signed. the law on November 17, 1871, thereby putting it into effect.

As a result, the Giessen Chamber of Commerce was formed in 1872 .