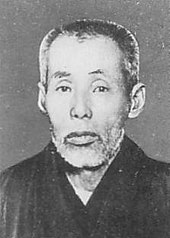 Gondō Seikyō became an advocate of Japanese expansion after an extensive trip to Korea and China in 1886. He therefore joined the Amur League and was editor of the magazine "Tōa geppō" (東 亜 月報), a monthly magazine for the Far East.

In 1902 he settled in Tokyo and came into contact with Kita Ikki , Ōkawa Shūmei and other right wing thinkers. He joined the "Rōsōkai" (老僧 会), a study group that dealt with national problems, then founded in 1920 the "Jichi gakkai" (自治 学会). As a proponent of agrarian nationalism (農 本 主義, Nōhon shugi), Gondō thought of a state made up of self-governing village communities, free from bureaucracy and monopoly capitalism, under the direct rule of the emperor. His supporters took part in the peasant protest movements that developed in the late 1920s due to the economic difficulties in the countryside.

Gondo's ideas had a major impact on the radical nationalist movements of the early 1930s. He was even suspected of being involved in two far-right attacks in 1932, the "Blood League" attack and the May 15 incident .