The title of this article is ambiguous. See also: boundary mark . 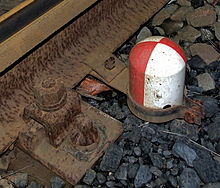 The boundary sign is a railway signal and marks the limit up to which each branch track of the converging tracks at a switch may be occupied. The respective other track may only be used if the occupied track is free of boundaries . The operator of the interlocking establishes this as part of the route check before allowing a train journey by placing a signal on it . It also takes into account the fact that a train that has previously driven in can still "stretch" a little after stopping by releasing the buffer springs and translates the previously freely driven limit symbol again .

If a boundary sign is crossed by two train or shunting runs in different turnout lines at the same time, a flank run occurs .

The exact position of the boundary sign is determined by the minimum distance between the two converging tracks, depending on the cant and radius . As a rule, standard-gauge railways have a distance of 3.50 meters between the track centers. In the case of three and four-rail tracks, there may be several boundary signs, each for normal and narrow gauge. There may also be multiple boundary marks for trains with and without jacked up or bolstered wagons in the case of trolleys or trolleys .

In Germany , the boundary sign (Ra 12 / So 12) is usually a small stake made of concrete or wood, with a red and white metal or ceramic cover striped from top to bottom attached to it, or just as a wooden stake or profile iron with a red and white paint finish Ballast placed between the two tracks that converge in the switch or crossing. Alternatively, a boundary sign can be attached next to the inner rail of the two converging tracks.

This condition is technically ensured in tracks that are equipped with a track vacancy detection system. The isolation boundary of the track circuits or the axle counters are not installed directly at the boundary sign, but at least six meters behind it.

In the case of trams, if boundary signs are attached at all, a line drawn across the direction of travel is usually used.

In Switzerland , as in Germany, the border sign is constructed as a peg with a hood, but with red and not red and white stripes. The yellow version is the end or the beginning of a track vacancy detection device. When the boundary sign is drawn on the floor, it is an elongated rectangle with two white and red diagonally arranged areas.

In Austria the border sign is called a border mark , previously also a police mark . As in the other successor states of the Austro-Hungarian monarchy , a black, white and black striped stone is used as a marker . In stations with older security systems, two boundary marks are often attached to tracks where the train participates in the route clearing when entering the route: The small boundary mark in the form of two red and white metal hoods (looks like the boundary mark in Germany) is at the point where the Branch tracks reach the minimum distance. The so-called black-white-black large boundary mark is at the point where the track insulation for the route resolution ends. If this track insulation is in different places in the two branch tracks, then the large boundary marker is divided into two parts.

In Italy , a white bar is placed between the branch tracks as a boundary sign.

In England and North America no boundary marks are put up at all.