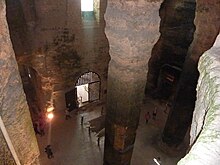 The cave church of Saint Jean (John the Baptist) in Aubeterre-sur-Dronne in Charente in France was carved into the rock by Benedictine monks in the 12th century who enlarged an older cave church. Only rediscovered before 1958, it extends under the rock on which the village stands. With rooms up to 20 m high, 27 m long and 16 m wide, it is the largest cave church in Europe and is also connected to Aubeterre Castle via a system of underground passages. It was sunk into the limestone and can therefore be described as monolithic . As a replica of the Jerusalem rock tomb, it is one of the most outstanding examples of the architecture of the quotation, the symbolic content of which, pointing to the certainty of salvation, contrasts with the cave architecture.

Their impressive dimensions and hundreds of graves dug into the ground show the importance of the place. The church was undoubtedly built after the return of a crusader from the 1st Crusade (1095-1099). Note the circular, two-story baptismal font and the hanging gallery, from where you have a view of the entire interior. Its main purpose was to keep relics, which the lord of the castle Pierre II. De Castillon had brought back from the Holy Land after the Second Crusade, in a series of niches and in a shrine, the shape of which was inspired by the Holy Sepulcher in Jerusalem.