The Hotel Bildungszentrum 21 ( spelling hotel bildungszentrum 21 ) is a hotel near the Spalentore in Basel . The main building was built in 1858/1860 according to plans by Johann Jakob Stehlin the Younger for the Basel Mission and is a listed building. 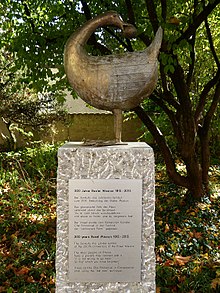 Sculpture for 200 years of the Basel Mission

The building was important for religious and social life in Basel from its foundation in 1815 to the First World War . After opening in 1860, the mission house served the Basel Mission as a seminar house for a century where future missionaries were trained. In addition, from the beginning it had individual, publicly accessible guest rooms and was a meeting point and place for further training of theologians and linguists from all over the world who used the extensive library or were passing through. After the Second World War , an upswing began.

At the beginning of the 1950s, the training of missionaries was significantly reduced. The vacated rooms served as offices for the Basel Mission and as additional public hostel rooms. This was followed by a crisis and fundamental changes. In 2001 the education center 21 was built in the basement, on the ground floor and in the southwest half of the upper floors of the mission house. Since then, 18 rooms have been used as seminar rooms. Theologians visit the special library for contextual theology of Mission 21 during their stay .

One of the largest private parks in Basel borders the building. Originally it was a training garden for missionaries who learned horticulture in order to be able to look after themselves overseas.