"The aim and result of the constituent analysis is to break down a linguistic expression into a hierarchically defined sequence of constituents."

For this purpose, linguistic units (sentences, words) are divided into two parts as often as possible. The elements resulting from the first decomposition step are called immediate constituents.

The result of an IC analysis can be represented by a structure tree (example: see below), by phrase structure rules , by a box diagram (example: part of a sentence ) or by indexed brackets.

IC analysis was developed in American structuralism , which can be traced back to Leonard Bloomfield and his work Language (1933). A prerequisite for its development was an emerging interest in dying Indian languages . In addition, Bloomfield was based on the method of behaviorism , which is limited to empirically observable, physically quantifiable behavior. The research goal was the exact analysis and description of languages, which is why this research area is also known as descriptive linguistics . The structural approach is based on two basic operations: the decomposition of a linguistic continuum and the classification of the segments. The subunits determined by this method are referred to by Bloomfield as immediate constituents , or IC for short.

The IC analysis was developed for syntactic sentence analysis, but is also used in morphology for the distributional classification of morphemes and in phonology for the analysis of syllables.

The segmentation of sentences is carried out through various syntactic tests, such as the replacement and displacement tests. If the expression to be analyzed can be freely moved in the sentence and replaced by a simpler expression, it is considered a constituent. The next step is to classify the constituents according to their function and category.

Result of the analysis ( syntactic functions and categories):

Structure tree. The syntactic categories are marked in black, the functions in red.

The analysis of the constituents is usually accompanied by an analysis of their structure or the relationships in which they stand to one another. The various syntactic functions are combined into a structure tree. Using the constituent structure analysis , z. For example, it can be proven that in the example sentence the predicate annoys is a more immediate part of the sentence than the accusative object the cat , since the object is notated one level lower than the predicate.

Morphemes are the smallest meaningful units of language that need to be determined with the help of IC analysis. In general understanding, words are the smallest meaningful units. However, various examples (eg: "Housing Association") show that words can contain other words or morphemes. These elements cannot always be called words, but they still contribute to the meaning of the whole word. For example, the morpheme "-ness" in "urgency" changes an adjective to a noun. For this reason, words are broken down to classify their components. When words are segmented into morphemes, the linguistic utterances are broken down into a hierarchically defined sequence. It is determined how the word came about and the constituents are broken down into two parts according to the order in which they came about (principle of binary). This principle is carried out as long as possible, i.e. H. until the word was segmented into its individual morphemes. It applies that inflected endings are always cut off first. The constituents should be usable in as many other environments as possible to form words (greatest possible distributional equivalence). At least one constituent should be involved in the meaning of the whole word in terms of its meaning or grammatical function. Once the segmentation is complete, the second step is to classify the determined morphemes (see morphology (language) ). 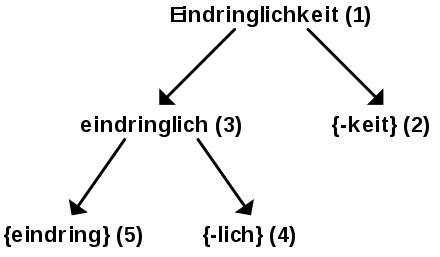