from Wikipedia, the free encyclopedia
This is the spotted version , flagged on June 21, 2018 . There is 1 pending change that has yet to be viewed. 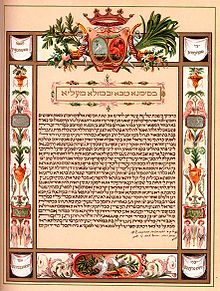 The Ketubba (Hebrew "written, document", literally: "It is written") is the written Jewish marriage contract . It is written in Aramaic and signed by two witnesses.

In Orthodox Judaism , the ketubba defines the husband's obligation to his wife . He is committed to ensuring her support, nutrition, healthy life and joy. In a narrower sense, the ketubba secures the rights of the woman to which the husband is obliged (three rights): 1. Maintenance (Sch'era), 2. Clothing (Kesuta), 3. Sexual intercourse (Onata). The Ketubba also regulates the financial security of the woman in the event of a divorce or the death of the man. The ketubba has no obligations for women.

The text of an Orthodox Ketubba, translated from Aramaic, reads something like:

"On ... days of the week, on ... days of the month ... of the year ... after the creation of the world, according to the time calculation that we count here in the city of XYZ. A., son of B., said to the virgin C., daughter of D., be my wife according to the laws of Moses and Israel, and I will work for you, hold you in honor, feed you and provide for you , according to the custom of Jewish men who work honestly for their wives, honor them, feed them and provide for them. I will also give you the morning gift of your virginity, 200 zus (denarii) in silver coins, which are due to you according to the Torah , as well as your food, your clothing and all your needs, and I will come to you in the manner of the whole world. ' And she, the virgin, has agreed to become his wife.
And the dowry that she receives from her father's house, be it in silver, gold, jewelry, clothing, household utensils or bedding, is 100 silver coins. And A., the bridegroom, has agreed to add 100 Sus silver coins to her, so that the total is 200 silver coins.
And A., the bridegroom, said thus: I take over the guarantee for this ketubba, dowry and bonus for myself as well as for my heirs after me, so that it should be paid off with the best and most excellent of my fortune that I have on earth that I have acquired or will acquire, be it real estate or movables. All this possessions, even my cloak on my shoulders, should guarantee or vouch that your ketubba, dowry and bonus will be paid for in my life and after my death, from this day on for all eternity. '
A., the bridegroom, took on the guarantee for the morning gift, dowry and encore, in accordance with the strict rules of the Ketubba and the additional documents, as they are customary with the daughters of Israel, and according to the instructions of our sages, not as a mere promise or as a document form .
All this has been declared on the part of bridegroom A., son of B., for C., daughter of D., with regard to everything written and explained above, in order to obtain it legally. We (the witnesses) have legally acquired the above rights from bridegroom A., son of B., for bride C., daughter of D., the virgin, by means of a piece of clothing that is suitable for Kinjan.

Everything is firm and legally valid.

In some areas the groom and bride also add their signatures.

However, this form of Ketubba is only used in Orthodox Judaism. The majority of Jews in North America and a significant minority of Jews in Europe and Israel practice forms of Conservative or Reform Judaism . In these denominations, the ketubba serves the partners primarily as a solemn declaration of their love for one another and their mutual promises and obligations. This usually includes a reasonable contribution to the living costs, but both partners take on this obligation equally. Morning gift and dowry are not included. Many non-Orthodox ketubbot also include a passage in which the groom undertakes to grant his wife a divorce if requested. Because some Jews marry members of other religions, there are also Ketubba texts for such mixed-religious marriages. The same applies to the growing number of same-sex Jewish partnerships, which are sealed in a religious ceremony and for which there is also ketubbot. Non-Orthodox ketubbot are not simply a formality, but serve the couple as a kind of solemn "mission statement" of their marriage. Correspondingly much care is taken in the formulation. The fact that the ketubba is written by calligraphers and lavishly designed by specialized artists is part of the Jewish tradition of chidur mizvah, ie the "embellishment" of a religious obligation. Many couples have their ketubba framed and hang them in a place of honor at home.