The Leonids are a meteor shower (shooting star stream ) that can be observed every year in November. Its radiant lies in the constellation of Leo (Latin "leo" = "the lion"), about 10 ° north of the star Regulus . Its origin is the comet Tempel-Tuttle , which leaves countless fragments ( meteoroids ) behind on its orbit around the sun .

If the earth's orbit crosses such a cloud of fragments and these get into the earth's atmosphere , they burn up and can be perceived as falling stars ( meteors ). The Leonids are extremely quick in this. 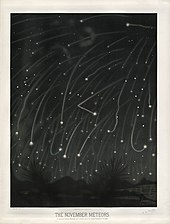 Leonids on an astronomical drawing of the 19th century ( Trouvelot , 1881)

The peak of activity can be observed on the night of November 17th to 18th. The shooting stars are extremely fast with a geocentric speed of up to approx. 72 km / s when they penetrate the earth's atmosphere. Their high speed is due to the fact that the meteoroids move in the opposite direction to the movement of the earth around the sun through space, so the relative speeds add up.

The Leonid Current was once much more active than it is today, which is why November was considered the month of falling stars in earlier times. In the meantime, however, the debris cloud of the original comet has already been scattered very widely, which is why the current usually only has a weak maximum.

However, every 33 years there can be a special heavenly spectacle : If the earth crosses the orbit of the comet Tempel-Tuttle shortly after it has crossed the inner solar system , the number of visible Leonid meteors is particularly large. A meteor storm then occurs with several thousand meteors per hour, as was the case in 1966, for example. In November 1833, up to 200,000 shooting stars per hour are said to have been observed.