Since permanent memory was not available at that time and the memory chips were correspondingly small (HP-65: 100 bytes ; HP-67/97: 224 bytes; HP-41C in the basic configuration 448 bytes), this was the only way to save programs and To secure data even after the computer has been switched off, to exchange it with owners of identical computers or to distribute it commercially. 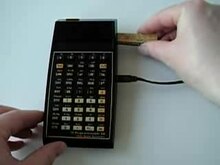 The picture shows three magnetic cards from Hewlett-Packard that were used for the HP-65, HP-67/97 and HP-41 models (the 1 cent coin serves as a size comparison):

The magnetic layer is on the back. The technology consists of a read head (related to cassette recorders at the time ) that wrote two tracks. Because these tracks were offset to the center and did not fill the entire magnetic card, the card could be turned over and the other end inserted for writing (see markings 1 and 2 on the cards). A motor ensured that the card was fed evenly and led it past the read head.

In the early 1980s, HP also offered the HP-71, which had longer cards but got by without a motor. This significantly reduced energy consumption, especially since the NiCd batteries of that time were significantly below today's capacities and were correspondingly quickly discharged when the motor was running.

Cutting off the corners created write protection; cards that were cut accordingly could only be overwritten by additional measures.

The term "magnetic card" is also used for magnetic stripe cards according to ISO 7810 .