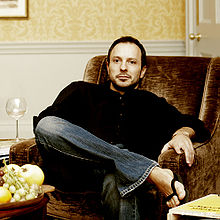 Meck first made a name for himself as a DJ and was among the DJ MAG Top 100 DJs worldwide in 1999. He moved from his home in the UK to Los Angeles in the early 2000s , where he also became head of the production company Free2Air Recordings .

In 2005, while browsing an LA record store, he came across the album Thunder in My Heart , which Leo Sayer had recorded in 1977. While listening to it, he got the idea to remix the theme song house style . He was also motivated by the fact that Sayer and his partner Tom Snow had written and recorded the song in Los Angeles at the time. He got in touch with Leo Sayer, who now lives in Australia, and convinced him of the idea of ​​recording the song again together. They both met in London.

The result of the collaboration was the single Thunder in My Heart Again . The song was immediately traded high by DJs and radio stations and after its release in February 2006 it went straight to number 1 on the UK charts and stayed there for two weeks. In spring 2007, the second single Feels Like Home was released.