The moccasin (engl. Moccasin ) is a soft shoe model (Slip) without paragraph , whose shaft is guided under the foot and gets on the top side usually an additional so-called insert: a palm-sized piece of leather, of a common striking held hand-stitched seam puckering Leather edges sewn on for dimensional stability. 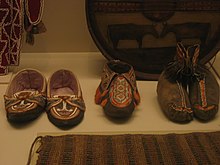 Moccasins in the British Museum

The moccasin is considered to be one of the oldest shoe models known to man. It is the shoe of the North American natives , the Indians .

For the Indians, moccasins were made by women. Because the moccasin is not a very durable shoe model, these were always made in stock and even traded. Woodland Indians wore moccasins without an additional outsole , which helped them to feel the ground while hunting in the forest, while the moccasins of the Bergland Indians had an additional rawhide sole to protect the foot and increase durability.

For festive occasions, moccasins were decorated with quill work , later also with glass beads by the settlers . In the 18th century, the first moccasins were sent to England by the American settlers of European descent , where they became fashionable as slippers.

Features of the moccasin

This is a soft slip-on shoe made of leather without a heel, with the shaft looped under the foot. Today, genuine moccasins are rarely offered that have all the characteristics of this shoe type:

The moccasins that are mainly offered nowadays are often made more suitable for everyday use by a floor structure that differs from the original. In addition to the simple sole due to the design , in which the insole is also the outsole, many modern models are equipped with an additional insole and / or with a separate outsole.

Moccasins can be used as flat shoes , ankle-high boots or extended by a sewn-on boot tube as a boot moccasin that extends below the knee.

Moccasins are made of soft shaft leather, which makes them very cuddly. The foot finds no guidance or support in them. This shoe model also does not increase shock absorption due to a missing or only thin outsole. Therefore moccasins are not suitable for long journeys or for previously damaged feet.

Due to its inadequate water resistance, it is a fair weather shoe. Its casual and sporty appearance predestines the shoe for leisure and makes it unsuitable for business wear; there loafers mark the limit of what is still wearable, halfway formal. 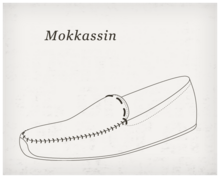