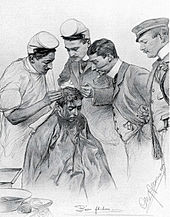 Protocol of a scale stating the number of "bloody" (1906)

The needle ratio is in striking student associations commonly the ratio of the number of needle sticks, which are necessary to operating at a scale resulting scars to sew .

Although the scale knows neither winners nor losers, the needle ratio unofficially plays a role in the fencing reputation of a fencer or his corporation. That is why the timpani doctors sometimes sew slings with as few stitches as possible. In the 1850s, the timpani doctor Friedrich Immisch even developed methods to further reduce the number of needles in the case of hits on the head by knotting the hair of the timpani edge around the crotch.