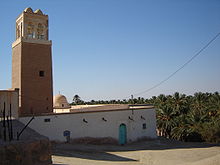 Mosque on the edge of the Corbeille

Nefta ( Arabic نفطة, DMG Nafṭa , ancient: Aggarsel Nepte ) is a city in southern Tunisia with around 15,000 inhabitants. The city is located near the Algerian border north of the Chott el Djerid salt lake . The former caravan station with its 24 mosques and over 100 marabouts is the religious center of the Bled el Djerid region and a stronghold of Sufism .

Like neighboring Tozeur , Nefta is characterized by the adobe architecture characteristic of this region of Tunisia. However, in the past, especially in 1990, catastrophic rainfall caused great damage to the historical building fabric.

Nefta consists of two parts on either side of the Corbeille basin , from which the sources of the oasis sprang. Today the springs are dry and fossil groundwater is extracted. To the west is the Chorfa district , the old town of Nefta with winding alleys and numerous sacred buildings. East of the Corbeille is the new town with the souks . The Oued ( wadi ), which rises in the Corbeille, irrigates the 10 km² large oasis which adjoins Nefta in the south. It houses the Zaouia Sidi Bou Ali , the burial place of an Islamic saint of the 13th century, the most important pilgrimage site in Nefta.