This article deals with the Neptune grotto in Potsdam, for the grotto in Sardinia, see Grotta di Nettuno . 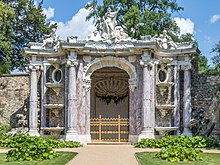 The Neptune Grotto in the Sanssouci Park in Potsdam was created on the east side of the area as part of the planning of numerous water features. On behalf of Frederick the Great , Georg Wenzeslaus von Knobelsdorff produced the design, which was carried out between 1751 and 1757. The sculptor Johann Peter Benkert took over the grotto work and the sculptural decorations from 1754 .

The garden architecture, made of white and pink Silesian marble, was crowned with Neptune , the Roman god of the sea, two naiads and two tritons . The marble sculpture of Neptune, completed by Benckert in 1760, was probably based on a model by the sculptor Georg Franz Ebenhech , who was originally commissioned to make it, but was unable to carry out the commission for health reasons. Cascading mussel shells were installed on both sides of the grotto, over which Havel water should flow down. However, due to technical ignorance, the experiments did not work and only came about a hundred years later in the time of Friedrich Wilhelm IV after the construction of the pump house with the help of steam power.

Benckert decorated the cave room with rock crystal drusen from the Harz and Silesia as well as corals and shells from Holland. This decoration was changed from 1840 to 1842 in the course of a restoration with colorful shells and festoons made of porcelain flowers and the entrance was provided with an iron grille. A Venus de Medici in the grotto and two tritons on the side of the grotto are no longer preserved. Venus was replaced around 1850 during renewed restoration work by the group The Ingenious Jubal Teaches Children To Carve Flutes , from the workshop of the Potsdam sculptor and terracotta manufacturer Wilhelm Koch (1815–1889). After a gilded Venus, which can be traced in the grotto from 1907 to 1945, one of the former eight large marble shells from the marble colonnade of the "Rehgarten" of the park, which was built from 1751 to 1762 according to designs by Knobelsdorff, but demolished in 1797 due to dilapidation, stands there today Sanssouci, which was also part of the program of the water games from the Frederician era.