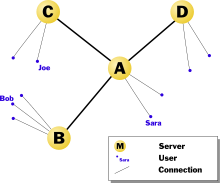 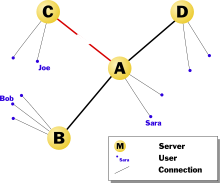 A net split between server A and server C.

A net split on freenode

Netsplit is a term from the Internet Relay Chat and describes a connection interruption within an IRC network , whereby this is divided into two independent sub-networks.

For the users in one sub-network, it appears as if the users on the other part are leaving the network. A user leaves the network due to a network split

or a similar message is issued.

The cause can be local, often short-term, server or connection failures. In rare cases, however, net splits are also planned, for example when maintenance work is carried out on servers. So net splits are usually not intended, even if this is sometimes assumed. In the event of a net split, the servers then try independently, depending on the configuration, to re-establish the connection to the separated server. In the event of a long-term malfunction, the IRC operators of the IRC network may have to re-establish the connection manually.

In large networks, the likelihood of net splits increases because they consist of a larger number of servers and connections between the servers.

Depending on the configuration, in the case of a netsplit, it is not specified to which server the netsplit was in order to minimize the risk of an attack, e.g. denial of service .