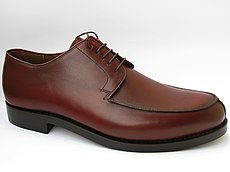 The shoe model with the name Norwegian is a men 's low-cut shoe with a blue cut with a leaf insert on the back of the foot and a vertical seam on the tip of the shoe.

Three model variants are known from the Norwegian:

Norwegians in the French style are also worn with elegant clothes (suits, combinations). In the rustic and in the original variant, they are combined with casual clothing. The high-quality Norwegian shoes are offered either with a welted or double-stitched design; the somewhat coarse-looking models often with a scotch gray embossed upper leather and with a crepe or profiled rubber sole.

Although the Norwegian is actually a basic model of classic men's shoes, it is occasionally also offered for women.