Operation Bolero was the code name for the US military reconstruction in Great Britain during World War II in preparation for a planned canal crossing. Originally planned as Operation Roundup for 1943, it was not carried out until June 1944 with Operation Overlord . 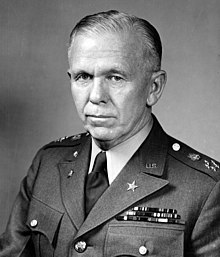 At the Arcadia Conference at the end of 1941 / beginning of 1942, the USA and Great Britain agreed in principle on the “Germany first” strategy. The first options for an attack against the German sphere of influence were also discussed. The head of the War Plans Division of the American Department of War , Dwight D. Eisenhower , suggested in February 1942 a rapid build-up of troops in Great Britain as a base for an attack across the Canal. The background to this demand was the fear that the Soviet Union could be defeated in the near future, which would make the successful fight against the Axis powers in north-western Europe much more difficult. After the success of the German Africa Corps in North Africa in early 1942, the plans for Operation Gymnast were initially postponed to a later date. This opened up the possibility for American planners for a serious investigation into a canal attack. However, due to limited transport options, a lack of landing craft, the need for troops from other theaters of war and the rather negative British attitude, a British-American attack in 1942 (→ Operation Sledgehammer ) hardly seemed  possible. A memorandum drawn up at the beginning of April 1942 on the basis of the considerations of the American Army Chief of Staff George C. Marshall served as the basis for the discussions of the Combined Chiefs of Staff in London in April, at which the British Chiefs of Staff approved in principle the American proposals for a landing in April 1943 .

Following the London conference, plans for Operation Bolero were set in motion. For this purpose, the British-American "Bolero Committee" was set up in Washington , parallel to a London committee on the actual landing operations. The American planners originally estimated that they would be able to bring an army of 890,000 men to the British Isles by the planned start of "Roundup" in April 1943. In May a program for the construction of landing craft and landing craft was decided, the associated "Special Committee on Landing Craft for the Continent" was subordinate to the Bolero Committee.

The Bolero Plan set priorities for military development, according to which the development of the air force came first before that of the land force. The 8th Air Force was planned for Bolero , whose headquarters were relocated to England in May. The first American divisions shipped to Europe were the US 1st Armored Division and the US 34th Infantry Division in June 1942 . In the same month, the "ETOUSA" headquarters of the United States Army under General Eisenhower was set up. General Carl A. Spaatz was appointed Commander in Chief of the Air Force in Europe .

In the further course of 1942, the Bolero Roundup plan stepped back behind the tasks in North Africa and the Pacific. The planned set-up in Great Britain was slowed down and ground units already in Great Britain were made available for Operation Torch (ex-Gymnast) planned for November . Instead of the planned almost 1 million men, according to the planners, there would only be 150,000 US soldiers in Great Britain in April 1943 (in fact there were only about 60,000). The plan to land in 1943 was thus seriously questioned. Furthermore, units of the 8th Air Force were transferred to the 12th Air Force , which was formed to support "Torch" , or assigned to a strategic reserve. In addition, the Bolero Roundup plan collided with the increased aid deliveries to the Soviet Union under the Loan and Lease Act .

It was not until autumn 1943, after the establishment of the COSSAC staff and the start of planning for "Overlord", that the construction in Great Britain was seriously resumed. The converted passenger ships Queen Mary and Queen Elizabeth, each with a capacity of around 15,000 men, which were safe from German submarines due to their speed, were also used for this purpose. From autumn 1943 to May 1944 about 150,000 men reached the British Isles every month. The main limiting factor was the capacity of the British ports. After all, on D-Day there were over 1.5 million US soldiers and more than 8,000 aircraft in two US air fleets in Great Britain.

Routes of the Bolero flights

The decision “Germany first” ensured that in 1942, despite the Pacific War, a lot of war material was shipped to England. However , many ships were lost to the submarine war in the Atlantic, and the majority of the lost cargo consisted of aircraft.

Therefore, Major General Henry "Hap" Arnold worked out a plan to move bombers and fighter planes to Great Britain by air with stopovers in Labrador , Greenland and Iceland . The Commander-in-Chief of the 8th Air Force Spaatz was commissioned with the implementation.

Only the long-range bombers Boeing B-17 and twin-engine Lockheed P-38 Lightning with additional drop tanks were suitable for this company . The individual squadrons consisted of a B-17 with the task of navigation, and at least two P-38 as flank protection. The most famous season of Operation Bolero is the " Lost Season " with the two Rotten Tomcat Green (with B-17 " Big Stoop " and four P-38) and Tomcat Yellow (with B-17 " Thu-Thu " and two P- 38), which had to make an emergency landing in Greenland on July 15, 1942 and was abandoned.