The pallet changer is an assembly of machining centers which exchanges the pallet in the work area for a second one. This enables setup or clamping work to be carried out on a second pallet outside the work area, regardless of the active processing in the work area. In the case of CNC- controlled machines, the change is automated. If the machine has a turntable, the pallet pick-up at the setup station is also designed to be rotatable, thus ensuring access from four sides.

In most cases, the pallets are lifted out hydraulically via a hydraulic cylinder located in the center of the rotation . The rotary movement, especially in the case of changers with 2 pallets, is usually hydraulic by means of a swivel motor. Cam drives or gear drives in conjunction with electric motors are also used for changers with more than 2 pallets. 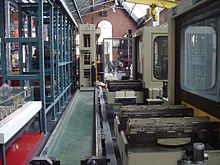 With the linear pallet changer, a suitable drive system pulls the pallet out of the work area via a roller conveyor and places it on the free setup station. Once this has happened, the table axis moves the machine table in front of the pallet that is to be loaded into the machine. The pallet is then pulled or pushed into the work area.

The underfloor drive goes back to an invention by the Chemnitz machine manufacturer Heckert , and is thus the original form of a linear pallet changer. There is a drive unit under each set-up station, which can push the pallet into or out of the work area pneumatically (small and medium-sized pallets) or hydraulically (large pallets). Since this system was technically very complex, it is almost no longer used today.

A drive unit that can move both pallets alternately is located between the two setup stations. To do this, when changing, the rocker switch is moved into the work area, the rocker engages in a holding device on the pallet and then pulls it to the setup station. Now the rocker switches over, grabs the second pallet and pushes it - after the work table has repositioned itself in front of the set-up station - into the work area. Now that the rocker has released the pallet, this drive moves back to the starting position. The drive itself is implemented by a ball screw spindle .

In the case of linear changers, the pallets are pulled out of the work area and back again on rollers with a chain. For this purpose, a bolt is attached to the horizontally running chain, which engages in a special groove (link) on the pallet. A separate set-up station is necessary for each pallet. Usually, each of the two set-up stations is provided with its own changer, but it is also possible to operate both set-up stations via a central drive arranged between the pallet stations.

To initiate the pallet change, the machine automatically moves to the change position and orients the pallet in the rotary axis (table axis) also to the change position. The position of the pallet to be changed is also checked and, if necessary, aligned. During the pallet change, no objects may be in the swivel / travel range of the changer so that no collisions occur. Protective devices ensure that the operator cannot reach into the moving area of ​​the changer while it is moving. Then the pallet changing gate or the loading hatch is opened. In the case of rotary changers, it is also common for part of the workspace wall to be located on the changer and to rotate with it. If all relevant queries have been made and positive, the pallets are unlocked on both places. Then the actual pallet change takes place. When the change is complete, a query is made as to whether the pallet is properly resting on its pick-up points. The pallet is then locked again and the loading door released at the setup station.

The so-called rotary indexing table can be viewed as a special form. This also enables workpieces and devices to be changed. This system is only used for vertical machines in traveling column design. There is a round plate half in the work area and half in the set-up station.