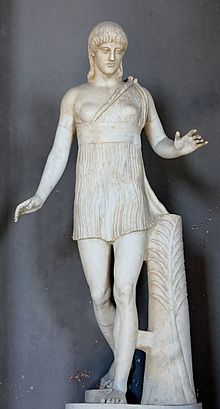 Pasiteles ( ancient Greek Πασιτέλης ) was a sculptor and art writer of the first century BC from Greater Greece .

He was a contemporary of Pompey and mostly worked in Rome . In 89 BC He received Roman citizenship.

His work is characterized by classicist tendencies, which he sought to combine with the elegance of form of Roman sculpture. Only names of his works have survived. The eclecticism of his works is believed to be clearly visible in the preserved works of his pupil Stephanos , a boy in the Villa Albani . His pupil Menelaus, in turn, returned to simpler forms in the famous Ludovisian group ( Orestes and Elektra ).

Pasiteles was of great versatility; he worked in marble, ivory, silver and ore. His work on excellent creations of older art (written in Greek in five books) has not survived, but has been used by Pliny the Elder . This mentions (nat. 35, 156) a statue of Jupiter made of gold and ivory, which came from Pasiteles, and a silver statue of the actor Quintus Roscius Gallus .