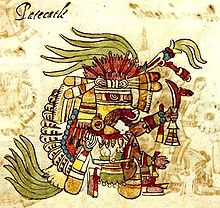 Patecatl ( Nahuatl : the one from the land of medicines) was the god of healing, fertility and the discoverer of peyote in Aztec mythology . He was Mayahuel's husband and with her had fathered the four hundred pulque gods, the Centzon Totochtin (four hundred rabbits). Thus he was also considered the father of Tepoztecatl and other gods known by name who were associated with pulque : Texcatzonatl , Colhuatzincatl , Macuiltochtli and Ome Tochtli . In the Tonalamatl of the Codex Borbonicus , Patecatl is assumed to be the eleventh week and the twelfth day ( malinalli , grass). In the Aztec calendar , Patecatl rules the 13th Trecena (from one monkey to thirteen house ). His Trecena is preceded by the Trecena Mictlantecuhtlis , followed by the Itztlacoliuhquis .