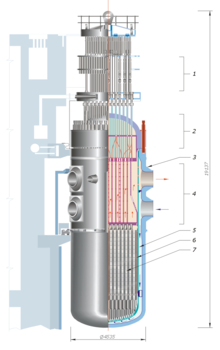 The reactor core ( English core ) is the part of a nuclear reactor that contains the nuclear fuel and in which the chain reaction takes place.

The reactor core is usually spatially divided into different zones. The central fissure zone in which the power-generating chain reaction takes place can be surrounded, for example, by a neutron reflector zone or, in the breeding reactor , by the breeding zone (breeding mantle) .