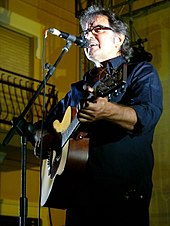 Ruper Ordorika (born August 16, 1956 in Oñati , Basque Country , Spain ) is a Basque singer-songwriter . He is one of the most influential musicians in the revival of Basque music. He was a member of the literary group Pott, which also includes Joseba Sarrionandia , Bernardo Atxaga , Jon Juaritsi and Manu Ertzilla.

Ordorika initially studied Spanish Philology, but he broke off his studies in order to return to his homeland Oñati and devote himself to literature and music. In 1980 Ordorika brought out his first album Hautsi , which was followed by Ni ez naiz Norruegako anmge in 1983 and Bihotzerreak in 1985 . His albums are attributed to rock, in some works the influences of traditional Basque music and so-called "ethnic" can be recognized. Ordorika wrote most of his texts himself, or they were written by Bernardo Atxaga , Joseba Sarrionandia or Jose Mari Iturralde.

In addition to his own songs, Ordorika also wrote the music for the play Henry Bengoa Inventarium, a literary spectacle in which Bernardo Atxaga and Jose Mari Iturralde were also involved. In addition to his work in the literary group Pott , Ordorika also wrote for the newspapers Pott and Anaitasuna , was a producer and collaborator for rock bands such as B. Hertzainak, and translated works such as John Steinbeck's Die Perle into Basque.

Hiru Truku is a Basque band consisting of Ruper Ordorika, Josba Tapia and Bixente Martinez. The group set out to revive traditional Basque music by adding a personal touch to British folk music.

Her first album Hiru Truku was released in 1994, Hiru Truku II in 1997. Both albums were created on the basis of folklore from the Basque province of Biscaya . In 2004 they released their third album under the title Nafarroako Kantu Zaharrak , which was based on the folklore from Navarre .