This article is about the Indian Buddhist. The Swedish-Tanzanian singer of the same name is described under SaRaha . 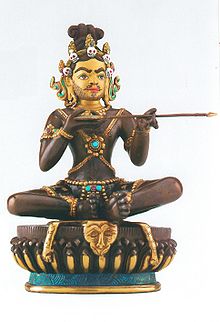 Saraha ( 8th century? ) Is one of the mahâsiddhas (compare siddhi ) of Indian tantric Buddhism , the author of mystical chants, and one of the founders of the Indian-Tibetan mahâmudrâ lineage, a tradition of meditation similar to Zen.

Saraha is said to have lived in the late 8th century AD and was a contemporary of King Dharmapâla (769–809; Pala dynasty ). He is considered one of the most important Indian yogis. His life story has been woven into a legend by various authors from very different and sometimes contradicting sources in Tibet. Accordingly, he should z. B. descended from a Bengali Brahmin family and was raised to be a Buddhist monk. It is unclear whether he was expelled from the monastery because he surrendered to the drink or was guilty of similar violations of the monastic rules, or whether he left the order of his own volition. He became a wandering yogi and student of Ratnamati, who initiated him into Guhyasamâjatantra and the methods of using the forces in the subtle channels (Sanskrit: nâdî, compare Nadi (yoga) ). After finding a mate, he worked as an arrow smith. Therefore he is always shown with an arrow in his hand. Other legends describe the companion as an arrow smith.

Saraha is the author of numerous mystical songs (Sanskrit: dohâ), in which he speaks out against belief in letters and traditional customs and in favor of a direct, personal path:

“It is through this, through which one is born, lives and dies,
through precisely that one attains the highest bliss.
But although Saraha utters these deep, mysterious words,
this stupid world doesn't seem to understand them. "

From Saraha one of the mahâmudrâ lineages goes on to Savari, Luipada, Dengri, Vajraghanta, Kambala, Jalandhara, Krsnacarya, Vijayapada, Tilopa , Naropa , Marpa , Milarepa , Gampopa and to other important lamas of the Kagyüpa tradition. Gos Lo tsa bas representation in Deb ther sngon po ("Blue Annals") gives an overview of the numerous ways of transmission.