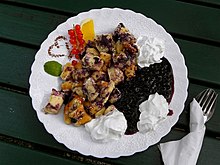 As Schmarrn or Schmarren (since the 16th century Upper German to "Schmer, schmieren"), in the Swabian as well as in the Baden kitchen also Kratzete , some dishes of the Bavarian and Austrian cuisine are called, in which the starting mass of the dish is coarse during the preparation is cut into small pieces and mixed.

The Swabian egg loaf is very similar to the Kaiserschmarrn , but it is often eaten with spicy side dishes.

In the figurative sense, the word "Schmarrn" is used as an expression of disdain in the sense of " nonsense ".