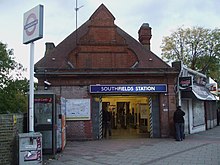 Entrance to the station 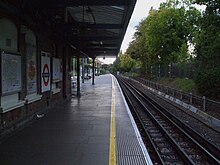 Southfields is an above-ground London Underground station in the London Borough of Wandsworth . It is located in the Travelcard tariff zone 3 on Wimbledon Park Road, in the middle of a quiet residential area. In 2014, 6.13 million passengers used this station served by the District Line . Around 1.2 kilometers south-southwest is the site of the All England Lawn Tennis and Croquet Club , where the Wimbledon tennis tournament takes place every year.

On June 3, 1889, the station was opened by the Metropolitan District Railway (MDR), the predecessor company of the District Line. The railway line opened on the same day, however, was built by the London and South Western Railway (L & SWR). Therefore, she leased the route to the MDR. The operation of electric subways began on August 27, 1905. The Southern Railway (SR), the successor to the L & SWR, stopped rail traffic on May 4, 1941. Until April 1, 1994, the section remained in the possession of the state railway company British Rail and was then transferred to London Underground. Because this section is still legally a railway today, the signals are managed by the railway infrastructure company Network Rail .