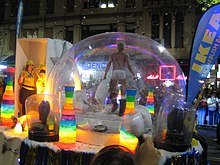 The Mardi Gras in Sydney , Australia is one since 1978 annually held each February, three weeks gay - and lesbian festival . More than eighty events take place during this time. The Mardi Gras Festival Parade was the largest event of its kind in the world in 2009 with 9,500 participants, 134 floats and 300,000 spectators. Participants are often in costumes and dance a choreography to the music of the floats; various social groups such as surf life savers or professional groups such as police officers take part in the parade in their work clothes.

The parade was first held in 1978 to commemorate the Stonewall riots - at a time when homosexual acts were still a criminal offense in New South Wales , whose capital is Sydney.

In 1994 the parade was broadcast live for the first time by the Australian Broadcasting Corporation (ABC).