Watercolor of the mosaic floor 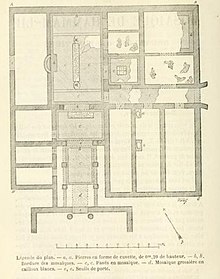 The Synagogue of Naro in the Tunisian town of Hammam Lif was the first ancient synagogue known to scholars. Previously, these buildings were imagined to be simpler because of the ban on images . The building, which can no longer be found, is considered the most important North African synagogue of the Byzantine era and is also known as the Synagogue of Hammam Lif .

In 1883 soldiers were stationed in Hammam Lif during the French Protectorate ; their captain, Ernest de Prudhomme, gave some of his men the job of turning the back yard of his house into a garden. On February 17th, they came across the ruins of a late ancient synagogue. Since it was the first such find, it was initially believed that it was a church.

The soldiers exposed the mosaic floor of the main building. Its appearance was recorded in watercolors and published. Realizing that there was a market for mosaics with animal and plant motifs, Prudhomme had the mosaic carpet divided into picture fields, which he first sent to Toulouse for restoration and then sold individually to museums and private collectors. Other rooms of the synagogue were also decorated with mosaics that have not been documented and have been lost.

The Brooklyn Museum acquired a group of 21 mosaic panels in 1905; 13 of them can be assigned to the floor mosaic of the main room. The others differ in their design and motifs, but it is being considered whether they come from the adjoining rooms of the Naro synagogue.

The synagogue, for which dates between the 4th and 6th centuries are suggested, was located in a villa complex and was a building ensemble of a total of 16 rooms. It thus resembles the synagogue of Dura Europos , or its floor plan resembles an ancient house with a floor area of ​​around 22 × 20 meters. The main entrance was from the south through a portal accented by two columns. The visitor first stepped into an atrium with a mosaic-clad impluvium . On the opposite side there was an entrance room, adorned with a mosaic with the donor inscription of the synagogue ruler . This room was used to enter the actual worship room. This central room was 5.25 meters wide and 9 meters long. It had an apse in the middle of the western wall.

To the east of the main room and with access to it was an adjoining room with an inscription that mentions the synagogue's instrumenta and is surrounded by motifs similar to scrolls; this could have been the storage room for the Torah scrolls . 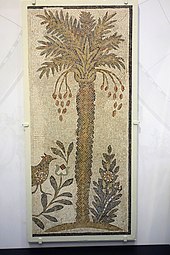 The mosaic floor can be divided into several segments. A large mosaic carpet on the left shows twelve medallions, mostly depicting birds and fruit baskets, framed by acanthus vines. A narrow rectangular mosaic carpet is made similarly on the right-hand side, which contains two animal motifs (a goose and a lion).

The middle segment of the mosaic carpet attracted the most interest. In its center is a Latin inscription (see below), flanked by two diamonds in which a menorah or a menorah between shofar and etrog can be seen. Above it, two large fish are depicted, the space between the fish is filled by small water birds and a wheel. This mosaic panel is damaged on the left edge. The image field under the inscription is symmetrical with a fountain in the central axis, on which two peacocks sit; the scene is flanked by two palm trees. Flowers, plants and birds are depicted in the spaces in between.

While the fountain motif is usually understood as a paradise scene, there are different interpretations for the big fish. Fish could have been a North African symbol of good fortune, the mosaic floor would then be mainly filled with decorative motifs from the repertoire that the mosaicists had on offer for other clients. Others see it as the mythical animals Behemot and Leviatan , from which a feast should be prepared for the righteous in messianic times, i.e. a religious theme.

The three inscription panels are now in the Bardo Museum in Tunis. The panel of the mosaic in the entrance hall names the synagogue director as the founder. The Latin inscription of the main mosaic reads: SANCTA SINAGOGA NARON PRO / SALUTEM SUAM ANCILLA TUA IULIA / NA P DE SUO PROPRIUM TESELAVIT. "The holy synagogue of Naro has decorated your maid Juliana, the girl (?), With a mosaic at her own expense for her salvation."