The trompe de chasse (literally: "hunting horn") is a hunting horn that is used as a means of communication by the hunters during a chasse à courre , a par force hunt .

Hunting music is known in France from the earliest times. It has been proven that this type of music was most cultivated and developed here.

In hunting riding, the horn, with its large, piercing sound that could be heard for miles, was a means of informing hunters of the current course of the hunt. For every movement of people and animals there is a suitable fanfare in hunting riding. Except for L'HALLALI SUR PIED and L'HALLALI PAR TERRE, however, there are no dead signals in the French-speaking world. Rather, they are pure visual signals. In addition, the music, which is often perceived as aggressive, encourages the dogs to work harder.

Originally, smaller horns (huchets) made of animal horn, which were worn on the hips, were used for hunting. In the military, too, these had the task of giving signals with the same tone. The Urhorn was called Olifant because it was made of ivory in addition to wood and metal .

The story of the hunting horn that has been handed down to us began in the 16th century. Due to the skills of the instrument maker, the metalworking possibilities and the demands placed on the wind instruments, pentagonal and hexagonal horns were built that were worn on a ribbon. The sound came out forward. The first round horns had a large bow that could wrap around the hunter's entire body. The sound outlet was now backwards.

In the course of the next 250 years, different models of hunting horns were created in the French-speaking world. They differed in the sizes as follows: 1½-wind the Chretien-Jagdhorn, 2½-wind the Dampierre-Jagdhorn, 2½ + 3½ wind the Dauphin-Jagdhorn and the 3½-wind Orléans-Jagdhorn. They were mostly tuned in the D pitch register. The big turns came about through the bulging headgear of that time.

In the period from 1630 to the end of the reign of Louis XVI. these hunting horns had their heyday during the courtly parforce hunts ( chasses à courre ) and his festivals. The hunting horns used were called then and are still called parforce horns, cor par force . Many of the fanfares and pieces of music blown during the hunts have been passed down to us.

The hunting fanfares were and still are blown by members of the equipage. A distinction is made between fanfares of circumstances and animals ( circonstances et d'animaux ). They are classically short and therefore simple and understandable for the hunting field. The fanfares and the longer concertante hunting music, which were only played after the hunt, were also known.

Today's horns with their shine can be described as elegant. They can also be used as church instruments for liturgical songs and concerts and harmonize with the sounds of the organ. The French association of all trompes players, the F. I. T. F. (Fédération Internationale des Trompes de Chasse - see below), founded in 1928, describes the blowing of the trompe as "an art that expresses the heart, soul and personality of the wind player". 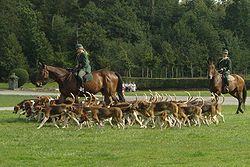 Before the instrument and its peculiarities are described in more detail, some definitions of terms in advance. Parforce, literally translated from the French language, means “by force”. In German usage we understand parforce hunt to be a hunt for live game with a pack of dogs and a horse. This form of hunting is forbidden in Germany for reasons of hunting ethics; instead, drag hunts are held on artificial tracks. If we now go parforce hunting across the national borders to our French neighbors with this French-German word combination, this term meets with incomprehension, because there this type of hunting is called la chasse à courre , literally translated as “the hunt on the run”. It is a selective movement hunting.

The Trompe de Chasse is a natural horn in the basic tuning “D” with a total tube length of 4.54 meters and a pitch range of around three octaves, starting with the sounding D. The actual usable pitch range depends, among other things, on the mouthpiece used and the ability of the wind player . The trompe de chasse is a transposing instrument , sounding D is notated as C. The tone D, the first natural tone, is called the pedal tone .

The trompe differs from the parforce horn common in Germany in a number of peculiarities. The most important difference, besides the basic tuning, is the narrow leadpipe of the trompe, which gives it its unmistakable sound. In addition, the trompe de chasse is now usually made in the 3½-wind form (Cor d'Orléans), while the parforce horn is more often made 2½-wind.

The instrument is blown in all gaits, walk, trot and gallop during the hunt on horseback. Understandably, a valve instrument would not be necessary in this case, since the rider's left hand is covered with the horse's reins, while the horn is held in the right hand. If the horn is not needed, it is worn diagonally over the body. The head and right arm are put through the clear diameter of the pipe coil so that the fall of the instrument rests on the rider's right hip, so both hands are free to guide the reins.

If you are confronted with the sound of the trompe de chasse for the first time as a listener , be it on the hunt or in the concert hall, both the sound characteristics and the type of interpretation of the melodies appear quite strange. There are various reasons for this. Our occidental sense of music is mainly based on the tempered (equally floating) mood. The natural tone series is a partial tone series . As a result, with some tones (especially noticeable when the 7th or 11th partial tone is combined with neighboring tones) we have the feeling that the natural tones do not correspond to the frequencies we are used to. Furthermore, the "D" mood seems strange to us. In the German hunting signal language we are used to a “B” basic mood. In addition, the trompe de chasse has the narrow scale length of the instrument, which creates this strong metallic (overtone-rich) sound.

Another strange impression arises from the way the hunting signals are interpreted. What often sounds like an inability to perform is the highest level of perfection in a style of presentation that is only performed in France on the trompe de chasse . This is called the ton de vénérie "tone of hunting riding ". Explaining the 16 components of the ton de vénérie here is beyond the scope of this article.

However, two salient features should be noted. These are the tayaut tones and the extreme vibrato .

The tayauted tones are an imitation of the dog bells of the pack of dogs on the instrument, usually a seamless, short-term raising of a tone by a third. When and where tayaut tones are used in a melody is subject to the regularity of the melodies interpreted in the style of the vénérie . Another striking feature is the extreme vibrato, or "ondulation" in French, which dictates the entire musical literature written for this instrument.

All of the peculiarities described above, the sound characteristics of the instrument and the interpretation of the melodies take some getting used to for the listener. H. you have to listen to the sound world.

The following French song: testifies to the love for the trompe de chasse :

The umbrella organization for French parforce horn players is called FITF, Fédération Internationale des Trompes de France , with its headquarters in Orléans. The association has over 2,000 members worldwide. The German national group has around 100 members. The German national group has been represented since 2016 by the Délégué Régional Roger Gilpert. The aim of the FITF is the systematic training of the wind players according to the traditional guidelines and principles of the association, as well as holding regional and international competitions, the international exchange of ideas and cultivating friendship across national borders. Detailed information on the history and the "Trompe de Chasse" cultural asset in Germany can be found at the Trompe Initiative. The Hunting Music Forum organizes regular courses with well-known instructors twice a year.