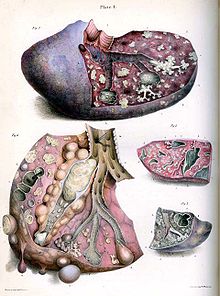 Drawing of a section through lung tissue with tubercles (bottom left)

In medicine and anatomy, a tubercle is a small bump or nodular swelling on the surface of a body or organ. This can be present as a normal surface structure, for example as nodular structures on the body surface of some whales, or as a sign of inflammation or other pathological surface changes. As anatomical features of teeth, bones or other structures, tubercles are called tubercles . In pathology, nodular tissue changes, so-called granulomas , are also referred to as tubercles, for example when diagnosing tuberculosis .

The leading edges of the blades of the rotors of wind turbines are provided with humps - they are also called tubercles .