In graph theory, an infinite graph is a graph whose number of nodes or edges is infinite. If, on the other hand, one speaks of a graph, it is often assumed that the number of nodes and edges are finite. A graph is called wegendlich referred if he, despite potentially infinite number of nodes, not infinitely long path has.

Other statements are not necessarily transferable to infinite graphs. 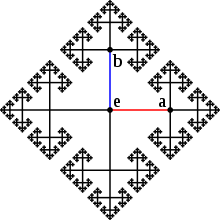 Expander graphs are important in many internal and external mathematical applications .

A graph is called locally finite if every node has only a finite number of neighbors.

An important class of graphs in geometric group theory are fine graphs , they include locally finite graphs and, for example, the Farey graph .