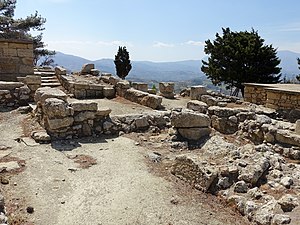 Vathypetro ( Greek Βαθύπετρο ) is an archaeological site 3 kilometers south of Archanes on Crete in Greece . It is located on the road from Archanes to Vathypetro , about 800 meters west of Vathypetro and 900 meters east of the southern foothills of the Giouchtas . Here you can see one of the oldest wine presses in the world.

The excavated complex dates from the Late Minoan period and was part of a settlement that stretched over three hills. Remains of the buildings in the immediate vicinity of the excavation site have been largely destroyed by viticulture in recent times . Around 1580 BC BC (SM IA) the construction of the western building, which was probably planned as a country seat, began. The country estate is also known as a mansion, villa or small palace. Like all Minoan palaces, it had a portico, a typical west facade, halls with light shafts, a lustral basin, a pillar crypt, a pillar warehouse and an inner courtyard. The orientation of the building is also reminiscent of the palace complex.

Before the west building could be completed, however, it was built around 1550 BC. Destroyed by an earthquake . A short time later, the reconstruction began. However, the room layout was changed. In addition to the foundations of the buildings, a Minoan wine press, a plant for the extraction of olive oil , Minoan ceramics and weaving weights and the remains of an ancient pottery workshop have been preserved from this time. It is therefore assumed that the building complex was converted into a farmhouse with workshops. Around 1470 BC BC (SM IB) the facility was finally destroyed and abandoned.

From 1949 to 1953 and again from 1955 to 1956, the Greek archaeologist Spyridon Marinatos carried out excavations here. Spyridon Marinatos, who planned a museum on site, partially reconstructed the walls by 1973. Later it was found that it is difficult to distinguish the old from the new building fabric. In 1979 Jannis Sakellarakis dug here.

West facade with parts of an oil mill

A paved street led from the west to the entrance of the west house, which was in the northwest. You first reached the west courtyard (1). Immediately to the left of the west facade at room 19 you can see the remains of an oil mill. The wall of the west facade jumps back a little at one point and thus forms a niche with a bench. This niche is probably a sanctuary. Immediately behind it is the pillar store (room 10), which was rebuilt and in which large storage vessels were found. Behind it you pass rooms 9, 8, and 7. Rooms 7 and 8 were probably stairwells through which one reached the roof. In the rooms on the west facade one found brightly painted plaster, stone lamps, a bronze idol, a fragment of a bronze cauldron, some gold leaves and three stone seals. 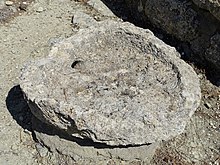 About 25 meters south of the entrance one turned to the left and after about 6 meters reached the entrance courtyard. The four pillars of the entrance courtyard (rooms 3 and 5) were arranged irregularly. A door in the north led to room 11, the ceiling of which was supported by a column. Part of an oil mill is also located here. Through the eastern door one reached the corridor (room 23), which led to the Minoan hall to the north. To the east this hall opened to a small inner courtyard (26). The facade of the hall was formed by three round columns. Later the hall was divided into two rooms (24 and 25) by a wall. Pottery wheels were found here, which is why it is assumed that a pottery workshop was located here during the second phase of use. 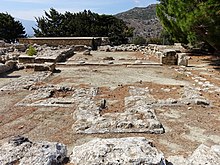 “Three-part sanctuary”, behind it the Minoan hall

To the east of the small courtyard, Marinatos identified the three angular niches as a three-part sanctuary. While Jan Driessen and Jannis Sakellarakis support this thesis, many archaeologists reject it. If it really is a tripartite sanctuary, it would be the first example of this temple shape, which so far is only known from Minoan depictions. The northern niche is said to be aligned with the equinoxes exactly after sunrise . Driessen and Sakellarakis therefore suspect a close connection between cult and agriculture.

The so-called Lustralbad (rooms 16 and 17) can be reached through the western door of the Minoan hall via room 14. If you return to the entrance courtyard, you will reach room 35 through the east door. From here a staircase in the south led to the upper floor. To the east one reached the reconstructed rooms 40, 41 and 42 via room 36. Room 40 was originally the so-called column crypt. During the second phase, the still existing wine press was installed here. The floor is paved with stone slabs and a stone basin was used to catch spilled liquids. The ceiling was supported by a column. At the southern end of the room some storage vessels were found.