A laying plow is an attachment or an independent special device or device combination for laying cables and pipes in the ground. The cables and pipelines to be laid are brought into the ground with the help of a suitable cutting and laying device, without digging the ground and without mixing the soil layers. This creates a narrow cut in the ground that collapses again by itself or by driving over the soil scar.

All kinds of partially flexible lines can be plowed in - gas, sewage, drinking water, electricity, communication lines or conduits into which fiber optic cables and power cables can later be blown, for example . With a laying plow, several cables or pipes can be pulled in at the same time. Route warning tapes and earth conductors can also be inserted in the same work step. Some of the lines that have been laid can also be surrounded by a bed of sand. A line to be plowed in is guided stress-free by a roller into a guide device behind the plow blade.

Self-propelled laying devices are specially developed vehicles or excavators, tractors, bulldozers or the like. as a basic vehicle with installed laying tools.

These special tools with mechanical or hydraulic functionality are attached to a basic vehicle such as B. Mounted caterpillar. They allow ducts for cables or hoses to be drawn in the ground, optionally with simultaneous laying of cables or hoses, but also accessories such as marking tapes. Laying depths of up to 80-100 cm are possible in the floors with floor classes 1 to 4, with additional support from a towing vehicle, floor class 5 is possible. These machines are suitable for smaller laying material. Combining cables, pipes, etc. is usually not possible.

A vibratory plow at work.

Like static plows, dynamic laying plows are either conversions of a basic vehicle or specially developed vehicles. Vibration devices are used here to reduce cutting forces and soil breakage.

A dynamic laying plow in action.

They are mostly used on floors with floor classes 1 to 4 and reach a laying depth of up to 1.5 m. The size of the laying material is usually limited to a diameter of 20 cm.

The attachments on the basic vehicle work in the rear or on the booms and usually have shorter cutting tools. That makes them mobile, but less stable against soil influences. The attachments must actively compensate for pitching movements of the base vehicle, which is why control devices are necessary.

In order to generate the necessary tensile forces in unfavorable soil conditions and to avoid major soil damage, machines with large-area drives and special plates are used to compact the soil.

These laying plows are often additionally supported by a towing vehicle or winch. They usually have a higher laying performance than static laying plows, but the laying depths and the possibility of combining the laying material remain rather limited. 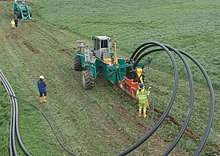 The separate generation of the propulsive force by a special towing vehicle provides very high forces for the ground breaking and laying. This enables higher laying performance, which is characterized by greater laying depth (up to 2.5 m), larger (up to 60 cm diameter) and complicated laying material (lines in triangular formation or at a specified distance) and high laying speed even in rocky soil of class 6.

Cable plow for laying submarine cables on the seabed

With a laying plow, cables and pipes made of flexible material are generally incorporated. Their size, number, arrangement and laying depth vary depending on the laying device or system. As already mentioned, laying rigid laying material such as B. Steel pipes in the pull-in process possible. Today's laying plow and systems are equipped with monitoring functions that document the tensile forces that occur on the laying elements, as well as the position and depth of the laid cables and / or pipes. As a result, the laying also meets the particularly high demands on the laying material and the laying quality.

The laying of cables and pipes with the plowing method takes place without serious incisions in nature: humus removal or removal of trees and bushes is usually not necessary, the soil layers do not mix. Several cables and / or pipes can be laid at the same time (with pulled laying devices) in one work step with high daily output. The resulting slot in the floor collapses by itself or is closed when the throw-up is rolled in. There is hardly any damage to the floor (with pulled laying devices).