A video blog , also known as a VLog or V-Log ( pronunciation : [ vlɒɡ ] or [viːlɒɡ]), is a blog ( weblog - internet - diary ) in the form of videos . There are periodically new videos published, z. B. depict a person's life. The form of activity is - analogous to blogging (English blogging ) - vlogging (English vlogging ). A vlogger is - like a blogger or weblogger - a vlogger . 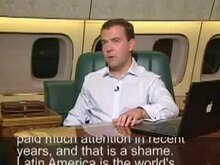 Play media file
An example of vlogging: Former Russian President Dmitry Medvedev after his visit to Latin America in November 2008

The term “vlog” is an artificial word made up of “video” and “ blog ”.

Since there have been graphical browsers , videos have also been linked on the Internet. It was not just the slow data transfer that prevented this technical application of HTML from spreading more quickly . A link can be placed on an image, but the content analysis is still unsolved to this day (conversion of image to text as the basis for further linking options). Compared to a blog, a vlog already faces the additional expense of not only having to produce films, but also - in order to make them accessible for hyperlinks and especially for web feeds - also have to be documented in text form.

Steve Mann referred to his first results in this field as glogs (cybor g logs ). The word "Vog" is also used as a self-description. With the availability of faster data transfers, more and more blogs will record video sequences and the boundaries between blog and vlog will be blurred.

In analogy to a blog, the posts in a vlog are predominantly the vlogger's own works; this is where a vlog differs from a collection of web videos.

With a geovlog, geographic data such as latitude and longitude is added to a video. In the absence of support for meta information in video files, this is done by special programming on the website on which the video is published. In addition, geospatial data can be added to any video publication in RSS feeds.

Bloggers and vloggers use mass media results to generate individual or topic-specific compilations and comments. Nevertheless, vlogs are increasingly gaining recognition as a journalistic medium and a. Even at awards with regard to promoting freedom of the press, for example B. The BOBs .