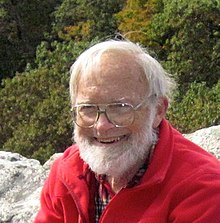 Will Crowther in the Shawangunk Mountains , 2012.

At the end of the 1960s he was involved in the development of the first Interface Message Processors , with which the first data transmission in the Arpanet succeeded.

Crowther worked for Internet pioneer Bolt, Beranek and Newman (BBN) in the 1970s .

In 1972 he had initially written a rudimentary, text-based simulation program about the inspection of a real stalactite cave system in Kentucky , which was expanded in 1975 to the first and the genre-naming adventure game called Adventure . In the 1970s , William Crowther was also involved in the development of the first multi-user dungeon game.