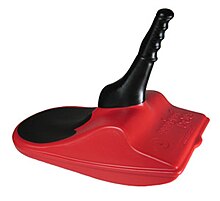 A coal shovel served as the basis for the mini bob, on which one slid over the snow with the handle first. This idea was implemented in 1969 by Johann Uttenthaler and Siegmund Loeger as a minibob. After Johann Uttenthaler's death in 1975, the patent rights were completely transferred to Loeger, which has been producing the mini bob since 1976 and marketing it worldwide.

Since 1976, the mini bob has been manufactured industrially from plastic in Germany, almost unchanged. In the course of time, minor modifications were made to the handle, the seat and the inscription. The mini bob consists of a small, skidless seat (therefore not a slide in the actual sense of the word) and a handle that is placed between the legs and serves as a brake and at the same time - supported by the feet - as a control lever. Thanks to its shape, the mini bob can be easily and precisely controlled with little practice.

Already in much earlier times, long before the invention of the coal shovel, the use of a central handle on the sled was recognized. The model shown from the Tyrolean Folk Art Museum has forged hooks at the end of the steel runners, which can be brought into contact with the ground by tilting the sledge using the "Zipfl" for the purpose of reducing speed.

Four other producers are currently offering replicas of the mini bobsleigh under the brand names “Zione” and “Zipfy”. There is also a further development under the name "Zipflracer". According to their manufacturers, the Zione and Zipfy are updated versions of the original mini-bobsleigh, which have only minor visual and technical changes. The Zipflracer, which has a significantly different look than the original mini-bob, should be less manoeuvrable, but very track-stable. Due to its heavy weight, it is less suitable for children than for adult drivers. The Zione is the youngest product in the range of small plastic bobs and also hardly differs from the original Mini Bob.

The only difference between the Zipflbob 2.0 and the original Mini Bob is that it has two holes on the outer wall through which metal rods with rollers can be pushed. On asphalt you can reach speeds of up to 100 kilometers per hour.

The mini bob as a piece of sports equipment

Since 1999 mini-bobsleigh races, including zipflbob cross , have been held. Four drivers start simultaneously on the course with banked turns, jumps and direction gates. The two faster riders each advance to the next lap until there is a final of the best drivers. Further disciplines are downhill and speed with individual timing.

In 2002 the first Zipflbob World Series with races in Austria, Germany and Switzerland was held as an international championship according to FIS guidelines. The individual events are called the Zipflbob Challenge.

The current world speed record (2009) in the Zipflbob race is held by Frederik Eiter from Pitztal with 157.34 km / h.

In Austria alone, the number of Zipflbobers is beyond the 5000 mark, and the trend is rising. Several hundred fans take part in numerous events and races.