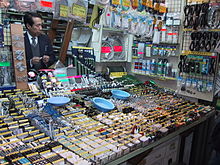 According to a 2003 survey by the Japanese Tourism Authority, 6.6% of all visitors to Japan visit Akihabara.

Akihabara is the name of one of the two train stations in Tokyo's Kanda district in the Chiyoda district . The Akihabara Station is an important railway junction. When you get off the train, the first thing you notice is a sign saying The electric town ( 電 気 街 , denkigai ). The area around the train station has a high density of neon signs.

Akihabara is the heart of the Japanese electronics trade and offers a wide range of electronic products. The prices for computer hardware are about as high as in European countries, but there are also cheap second-hand goods to buy.

There are many otaku in Akihabara . For fans of video games, there are countless thrift stores and the eight-story Sega World . But also in Anime , Manga and Merchandise Akihabara is a single point. Not only do larger chains such as animate , Gamers and Mandarake have their branches here, there are also many retailers.

Due to the high number of otaku, there are many cosplay cafés in Akihabara , in which the waitresses are disguised as maids ( メ イ ド , meido ). There is also a hairdresser and a casino of this type. In the train station and the business area you can often see young women in costumes of anime characters ( cosplay ) handing out advertising brochures.