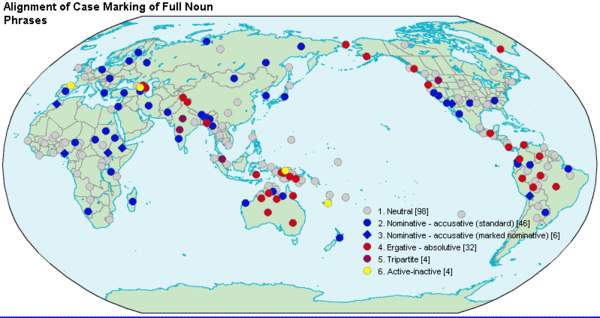 As accusative , even nominative-accusative languages are referred to in the language typology a type of classification of sentence members as he is familiar from most European languages, including the German: accusative use the same grammatical marker (eg. Case ) for the subject of transitive verbs (typically the agent argument) and the subject of intransitive verbs - this is the nominative case. This type of language gets its name from the fact that a special case is used for the direct object of transitive verbs (typically the Patiens argument), namely the accusative . The accusative tends to be the case, which is marked separately, while the nominative tends to be the case that remains unmarked (i.e. it has no endings).

Such a division into nominative and accusative additions is the most common case in the languages ​​of the world, but there is no alternative to it. a. the type of ergative language , which (ideally) proceeds in a mirror-inverted manner and uses a specially marked case only for the subject of the transitive sentence, unmarked cases in the other positions.

In a strict sense, only those languages ​​are accusative languages ​​in which an accusative is marked as a special case. In a broader sense, this designation is also applied to systems that mark supplements differently than by case, i.e. H. by word order or personal affixes on the verb, but make a similar subdivision.

A well-known example of an accusative language is Latin - here, however, in addition to the accusative, the nominative is usually also marked with an ending (which is very rarely the case in German, for example):