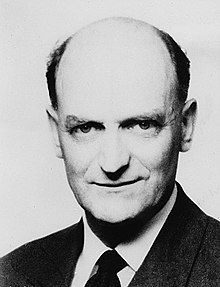 Alban William Housego "Bill" Phillips (born November 18, 1914 in New Zealand , † March 4, 1975 in Auckland ) was a New Zealand-British economist and inventor, who became known for the Phillips curve and the analog computer MONIAC .

Phillips first became known as a scientist in 1949 with the construction of the MONIAC ("Phillips Machine") computer , which was able to perform complex macroeconomic calculations using water flows.

In 1958, he published an empirical study in the Journal Economica that found an inverse relationship between the unemployment rate and the rate of nominal wage growth in the United Kingdom . This relationship can be shown graphically in the Phillips curve named after him . Fifty years after the article appeared, Economica Phillips began the two-year Phillips Lecture in honor.

Alban W. Phillips was born in Te Rehunga , New Zealand , in 1914 to the farmer Harold Housego Phillips and the teacher Edith Webber. However, he moved to Australia when he was a child. There he worked as a 16-year-old in an Australian mine and later in the cinema and as a crocodile hunter.

In 1937 he emigrated to Great Britain . Since he was hired as a technician for the Royal Air Force during the Second World War , he soon moved to Asia with the latter. There he was taken prisoner by Japan for 3.5 years. For his work in the war, he received the award Member of the Order of the British Empire (MBE) in 1946 .

After World War II , he enrolled in sociology at the London School of Economics and Political Science . After an initially unsuccessful degree, he switched to economics, where he finally gained fame and accepted a professorship.

In 1967 he returned to Australia and went to the Australian National University . Phillips died in Auckland in 1975.