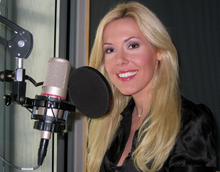 Alexandra Klim during a Kabel-Eins production in a speaker room at ProSiebenSat.1 Media Production Berlin (2007)

After successfully completing her architecture studies , Alexandra Klim switched to the media subject and began her career as a television presenter there. Among other things, she moderated television formats such as the travel magazines “Schlaflos!” And “Once around the whole world”, the infotainment magazine “Die Redaktion” on RTL2, and “Welt der Technik” and “Wissen und Technik” on the news channel N24. From 2005 to 2007 Alexandra Klim was news - Anchor the private channel cable one. Since 2014 she has presented "Screen - Das Kinomagazin" on Welt der Wunder TV. As an actress, Alexandra can be seen in the films "An island to dream - Koh Samui", "Huldra: Lady of the Forest" and "Black Butterfly". Alexandra Klim has been producing international feature films since 2011, such as "Finding Steve McQueen", "All Roads Lead to Rome", "Lavender", "Black Butterfly" and "Reclaim".